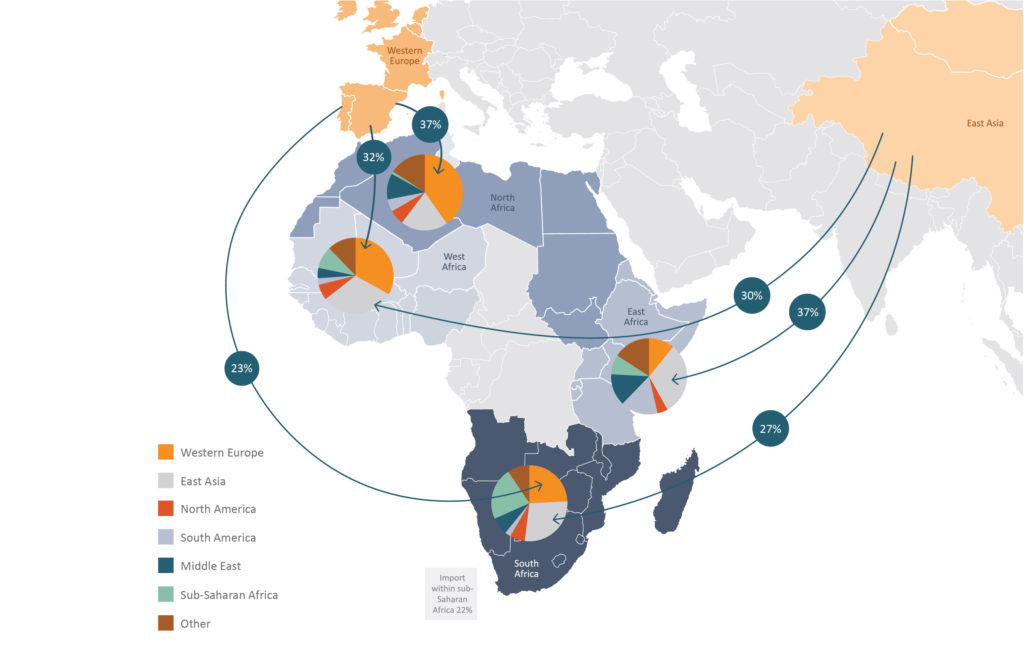 East Asia and Western Europe remain the continent’s most significant import regions, at 26% and 30%, respectively. Overall, African imports have remained relatively consistent with the prior year. However, a significant variation in North African imports was experienced as imports from Western Europe decreased from 41% in 2017 to 37% in 2018. This reduction is driven from the shift in imports from Western Europe to the Middle East and East Asia. Trade relations between Egypt and China have witnessed steady growth contributing to the 23% increase in imports experienced from East Asia.

Trade relations between Egypt and China have witnessed steady growth contributing to the 23% increase in imports experienced from East Asia.

These increases can be attributed to the imports by Egypt and Sudan from countries such as Saudi Arabia, Turkey, United Arab Emirates, and China.
East Africa continues to place a far larger reliance on East Asia for its imported goods, making up 37% of the region’s total imports. The region also has a much larger exposure to the Middle East and significantly lower exposure to Western Europe than the rest of the continent. This variation is partially the result of geography and cultural ties.

Trade in West Africa remains relatively consistent with 2017 as Western Europe (32%) and East Asia (30%) remain the largest import partners. Southern Africa maintains the largest intra-continental trade, as 23% of imports were from within the sub-Saharan African region. This is mainly due to South Africa exporting to its neighbours in Southern Africa, highlighting the potential for Intra-African trade as well as the importance of good transport links. However, South Africa’s exports experienced constraints in the latter part of 2018 due to loadshedding, implemented as a result of power supply shortages. The disruption to manufacturing and mining output, coupled with weaker external demand, has hindered further growth.

North Africa’s trade with sub-Saharan Africa remains negligible – which can be attributed to, amongst other factors, the poorly developed infrastructure linking sub-Sahara Africa with North Africa.

The difference between regions is due to the large impact of transport costs on import decisions, as well as cultural preferences and relationships established over time.

The difference between regions is due to the large impact of transport costs on import decisions, as well as cultural preferences and relationships established up over time. Because most products imported into Africa are sourced from geographically distant locations, the proximity to the import destination makes a big difference in the selection of trade partners. By far the most economical way to get goods to Africa is by sea, meaning that the shortest oceanic voyage becomes the preferred partner, by default.

There is very little differentiation across regions in terms of the products that the continent needs to import. A significant portion of imports (29%) is machinery, electronics, and vehicles imported from more developed regions while exporting primary products such as agricultural products and other basic commodities.

China remains the continent’s top import partner, constituting 16% of all imports; and is the primary import source in 14 African countries for machinery, electronics, vehicles, mineral fuels, and cereal. France, Germany and the US made up 15% of all African imports in 2018.

The Maghreb region is the top importer on the continent and their top imports consist of machinery, metals and materials and mineral products.

Despite the continent’s significant exports of crude oil, about 18% of Africa’s imports are made up of mineral products, most of which are refined fuels. Nigeria’s Dangote refinery, estimated to be completed in 2020, will have a major impact on the number of refined fuels imported into Africa from offshore, as the refinery will have sufficient capacity (estimated to process 650 000 barrels per day) to meet the country’s needs and supply the surrounding region. According to the Organization of the Petroleum Exporting Countries (OPEC), Nigeria’s 2018 oil demand is 445 500 barrels per day. Ghana has also recently publicised its interest to import petroleum from the Dangote refinery rather than internationally once it comes online. This highlights the need for improvement in infrastructure between countries and efficiency in border posts and bureaucracy.

Investors consider regional opportunities. It has become important to not only analyse Africa, but to consider how its different regions measure up to their global counterparts.

Nigeria still has the largest economy in Africa, followed by South Africa and The Maghreb region. Across all countries, agriculture, manufacturing and the wholesale and retail trade sectors contribute the most to GDP.

The cost of moving goods domestically can also be up to five times higher in Africa than in the US, but the African Continental Free Trade Agreement seeks to tackle challenges facing trade within Africa.

Most African countries have a pegged exchange rate regime, with conventional pegs being the most popular.

The Milk index infers price levels across the markets, seeking to identify under and overvalued currencies against the US dollar.