Trade within Africa remains poor, as two-thirds of African imports come from Europe and Asia, whereas intra-continental trade is a mere 13% of all African imports. The poor inter-connectivity amongst African nations is one of the obstacles that the continent faces.

Weak transport infrastructure has long been an issue for African trade contributing to the continent’s low level of competitiveness.

The World Bank Forum estimates that road networks carry USD 200bn of trade in Africa – approximately less than 10% of total GDP on the continent.

The World Bank Forum estimates that road networks carry USD 200bn of trade in Africa – approximately less than 10% of total GDP on the continent. Whereas in comparison, according to the US Bureau of Transportation Statistics, it is estimated that approximately USD 260bn (approx. 85%) of Mexico’s exports to the US occur via road, alone. The road network density is much lower in Africa than in other regions. The African highway network has many missing links and sections remain unpaved or require substantial repair, and some areas are considered to have serious safety concerns. These conditions are partially caused and further exacerbated by the sheer size of the continent and the resulting large distances between cities.

The continent’s railway conditions are equally poor. Colonial powers each built different railway networks in different countries, and the rails do not necessarily link up, which makes it difficult for countries to move goods between them. 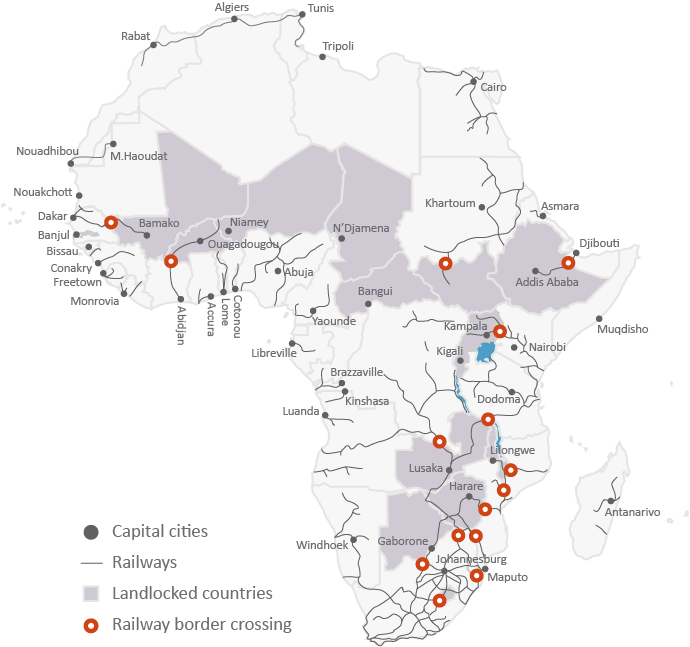 Intra-national trade costs are high in many countries in Africa. These costs are incurred both when transporting goods over long distances, and when clearing the goods at harbours or border controls. Doing Business measures the time and cost (excluding tariffs) associated with three sets of procedures—documentary compliance, border compliance and domestic transport—within the overall process of exporting or importing a shipment of goods. The most recent round of data collection for the project was completed in May 2018. Sub-Saharan Africa ranked last out of all global regions, with a border compliance time of 97.3 hours, compared to the much more favourable 58 hours of North Africa. The total cost to import 15 metric tons of containerised auto parts was a staggering USD 605.8 USD; where North Africa’s cost to import was USD 442.4.

The cost of moving goods domestically can also be up to five times higher in Africa than in the US. According to RMB’s “Where to invest in Africa” 2019 publication, the estimated cost of transportation in Africa is around 50% – 175% higher than other parts of the world. Data from the UN Economic Commission for Africa (UNECA) has estimated that removing the high border tariffs between African nations could increase intra-African trade by 52% in less than five years.

The African Continental Free Trade Agreement (AfCFTA) seeks to tackle these challenges facing trade within Africa, such as pricing, burdensome administration, infrastructure and governance. The agreement was signed by 44 countries in March 2018 and has the potential to boost the continent’s global connectedness, especially as additional countries continue to join the agreement. The launch of the “operational phase” of the agreement in July 2019 may enable investment opportunities in transport infrastructure and cross border trade.

Some of the factors contributing to the significantly high costs, and prolonged time of exporting and importing by sub-Saharan African countries include, according to The International Growth Centre, the price of inputs such as fuel, labour, and equipment; as well as market characteristics such as regulations, transport industry, and burdensome trade procedures. Exporters and importers require 50% more time to get exports to market in Africa than in East Asia. Reducing such delays could have a dramatically positive effect on export volumes (Arvis et al., 2014). Lastly, inferior technology, for example, old truck fleets that are fuel-inefficient, may severely increase the cost of intranational trade (Source: Atkin and Donaldson, 2015).